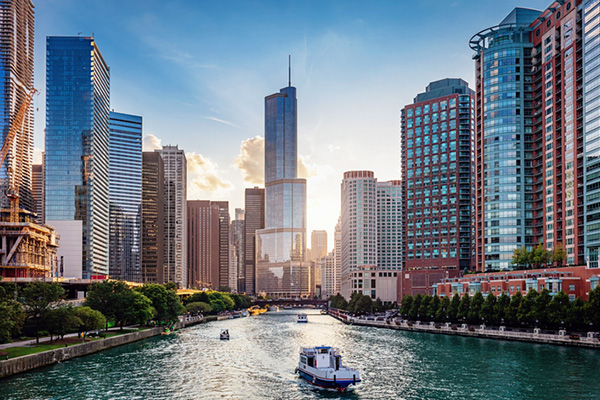 Illinois, known as the prairie state, is located in the midwestern United States. It is bordered by Wisconsin, Indiana, Kentucky, Missouri, and Iowa. The state comprises three main regions. The Central Plains region, the Shanee Hills region, and the Gulf Coastal Plain region. Illinois has extremely fertile soil and its most popular crops are corn, soybeans, and apples. Illinois is also known as the “Land of Lincoln” because Abraham Lincoln spent most of his life there. Two other famous people include the inventors John Deere and Cyrus McCormick. Both of which made and left their mark on the farm machinery industry as their respective companies, John Deere, and McCormick, grew to become the dominant players in the farm and agricultural machinery industry.

Chicago is not the capital of the state, which will surprise many non-natives. Springfield is actually the capital. Chicago is known as the United State’s railroad capital, and is known as the “Windy City.” Chicago has an underground pedestrian system known as the “Pedway,” which covers more than 5 miles and links more than 40 blocks in the Central Business District. If you are walking around the streets of Chicago, you will certainly smell deep dish pizza, and you might see Wrigley Field, home of the Chicago Cubs and one of the oldest baseball fields in the United States.

Illinois has experienced impressive economic and population growth over the last several years. The economy of Illinois is the fifth-largest as measured by gross domestic product (GDP) in the United States and is one of the most diversified economies in the world. According to the Small Business Administration (SBA), there are approximately 1.2 million small businesses in the state of Illinois. This makes up 99.60% of all Illinois businesses. These small businesses employ over 2.5 million employees, which is approximately 45.50% of all Illinois employees. As you can see, small businesses are a fundamental part of Illinois’ economic foundation.

We enjoy and love working with individuals from all over the state of Illinois!

There are a number of different industries across Illinois that Peak Business Valuation, business appraiser Illinois, has worked with. We have experience with many types of industries as well as machinery and equipment appraisals all over Illinois. Here are some of the most common industries we work with:

Reasons for A Business Valuation in Illinois:

Looking for an insightful business valuation?