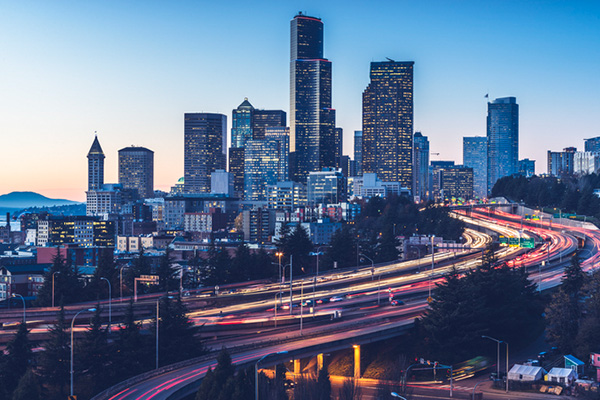 The State of Washington became a state in 1889 and was named in honor of George Washington. It is the only U.S state named after a president. Washington state is nicknamed the “Evergreen State” and is the nation’s leader in apple, pear, and cherry production. The state of Washington has the highest peak in the continental United States, Mount Rainier. Additionally, Mount St. Helens, which erupted in 1980, was the deadliest and most economically destructive volcanic event in US History.

The capital of the state is Seattle. If you go to Seattle, you will be sure to see the Seattle Space Needle, which was built for the 1962 World’s Fair. This historic piece of architecture features a rotating restaurant at the top which allows for a 360-degree view of the city’s skyline. Bill Gates is from Washington, and Microsoft’s headquarters are in Redmond, Washington. There are many other large companies headquartered in Washington. In addition to Microsoft, some of the other nationally known companies include Amazon, Starbucks, Costco, Nordstrom, and T-Mobile.

We enjoy and love working with businesses and individuals from all over the state of Washington!

There are a number of different industries across Washington that Peak Business Valuation has worked with. We have experience with many types of industries! We work with individuals running furniture stores, machine shops, manufacturing companies, food and beverage businesses, and everything in-between! We also perform machinery and equipment appraisals all over Washington. Here are some of the most common industries we work with:

Reasons for A Business Valuation in Washington: